Having The Difficult Conversations

While the text books might paint a rosy picture of what it is like to either lead or manage, I am sure we all know that there is a huge difference between the theory and the practice.

From time to time you are going to have difficult conversations with individuals, teams or depending on your role even the whole of the organisation. 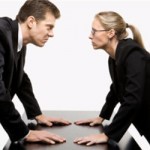 When I worked in big organisations I had to have difficult conversations with people who were not performing to the required level, with teams who were not delivering on projects and even to a public meeting when the organisation was facing some huge cash flow issues.

During my time working in big organisations I noticed that having the difficult conversations was not something that people tended to do.
Somehow they thought that if they just avoided the issue it would disappear. Yet the reality is that this never happens.

On one level we know that we need to deal with the issue or issues and at the same time we end up avoiding. Why do we do this? Maybe it because we are frightened that we will get a backlash, perhaps we don’t want to be seen as the bad guy or gal or a belief that people will figure it out from themselves and deal with it.

My experience has been that while people might not be ecstatic about what they hear from you, they would rather know and will respect you for communicating openly with them.

And the reality is if they don’t hear from you they will hear things on the grapevine (the informal communication channels or organisational rumour mill).

So how can you successfully have the difficult conversations you will need to have from time to time?

The first thing I would strongly recommend is to be fully prepared. The last thing you want to be doing if you are having a difficult conversation is to be making it up as you go along.

Secondly make a point of clearly and concisely stating what the specific problem is. So imagine you have a problem with a member of your team who is dominating proceedings at team meetings, you might say something like

“John I really value your enthusiasm and contribution in the team meetings and I have noticed that you are doing most of the talking and not really listening to others points of view”
Thirdly make it clear what the impact is of the problem behaviours that you are encountering. So carrying on with our example from above you might say something like the following.

“As a result of you doing most of the talking in the meetings and not listening others are becoming frustrated and thinking that there is little point in bothering to offer their views. If that happens we are going to lose a lot of potentially great ideas to deal with the challenges we face as a team”

Next give the other person or people the chance to give their perspective or point of view. So in our example it might be something like the following.

Always be willing to listen and remain open minded. If you go into a difficult conversation with a closed mind everyone will spot this and think it is pointless giving their point of view.

What are your thoughts on this issue?

What challenges are you facing?

How can I help you?

What action can we take now?

Acknowledge the other person or teams perspective. Let me be clear about what I mean by acknowledging. It is not the same as agreeing, it is letting the other party know that you have heard their perspective. You might say something like

Reflect back to check your understanding. I have found that this is really important to do when you are dealing with a stressful and potentially quite emotionally charged situation. Reflecting back is a way of summarising and re-confirming what you have heard. For example you might say something like.

“So let me recap, your main concerns are x, y, z is that correct?”